Ladies, Is Your LinkedIn Photo Costing You?

How Overexposure = Underpaid and 5 Ways to Boost Your Credibility

Clothes make the person.  Naked people have little or no influence. – Mark Twain

Ladies, would you rather be seen as serious or sexy?

Be promoted or picked up?
Are you headed for the boardroom or the backroom?

Judging by your photos on Linkedin, some of you don’t fully grasp how it works in the business world.

At work, your success is significantly influenced by how much skin you display.  Just as photographic images can be ruined by overexposure, your image can also suffer from overexposure.  Studies show that a 20% variance in remuneration can be attributed to appearance, so it pays to get your exposure right.

Put simply: overexposure kills your credibility.  If you expose too much skin in the world of business, you won’t be perceived as a credible person worthy of promotion.  Overexposure diminishes your authority, stalls your career, and prevents pay rises.

Ever since we humans started walking upright we’ve had trouble interpreting displays of skin.  The problem is that the brain sees skin display as a sexual signal.  Sexual signals are so powerful that even the biggest, smartest brains get distracted by them.

That’s one purpose of clothes: to dampen sexual signals.  Wearing clothes allows you to send intended signals without sexual overtones. 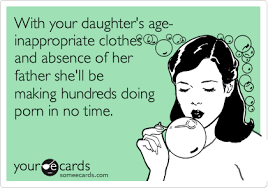 In the business world, exposing too much skin confuses your audience.  Male colleagues are especially confused due to their brain’s hardwiring.  For men, the more skin you expose, the more sexual the signal.  In the corporate world, overexposure will cost you credibility because the more sexual signals you send, the less likely you are to be taken seriously.

Nowadays casual business dress is common and so too is overexposure.  It’s not just the obvious visual distractions of bare midriffs and deep cleavages.  It’s also bare arms, bare legs and visible toes.  The point is:  anything that distracts a viewer detracts from your image. 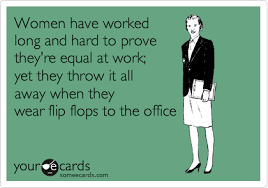 True story:  A female executive and two male colleagues enter a meeting.  The two males wear neckties and long shirtsleeves.  The woman wears a collarless, short-sleeved blouse which exposes her arms and neck.  The other people in the meeting immediately assume that the woman is subordinate to the men.

She’s not; she’s a partner in a law firm and the two males are her assistants.  Big mistake by the other people?

Sure, but understandable given how the brain works (and all brains work pretty much the same way).

The biggest mistake, however, was made by the female lawyer who forgot this fact:  you influence what others think by what you wear.  She diminished her own authority and confused her audience by the way she dressed.  Having failed to make an accurate first impression, she now has to reclaim her credibility.  That’s bad for business and bad for self-esteem.

It doesn’t matter who you are.  The more flesh you display, the less status you will have.  So cover up or be prepared to take lots of orders for tea and coffee.

Clothing is also protection.  We say ‘exposed’ when we mean vulnerable, defenceless or needing protection.  In business, men don’t expose much.  In the corporate work, the only male flesh you see is face and hands.  It’s now the rule: in order to convey competence, cover up.  Even in the most relaxed office, no man shows up to work in sleeveless t-shirts or sandals.  In a world where men wear suits, women decrease their authority if they expose more flesh than the men.

5 ways to boost your credibility:

Remember, the aim of the game is to expose your skills not your skin.

[I invite you to join me on Twitter, @CornerstoneAus]